When is a decade not a decade?

There is a small controversy simmering in the kitchen. But then again, chefs can be a little pedantic. The question is this: does 2020 signal the start of a new decade, or does a new decade not technically start until 2021? Answers please….But we are all agreed that it is definitely the end of another year and as December draws to a close, who can resist the urge for a backward glance at the past 12 months? Or even the last ten years?

If we cast our collective mind back ten years, here, to January 2010, the standout moment for the restaurant was the award of a Michelin star. Although the famous red guidebook is published these days in Autumn, back then chefs everywhere were tense with anticipation throughout Christmas, waiting for Michelin’s release every January. Fast forward to the latest Michelin 2020 guide, we maintain the star for the 11th consecutive year. It is an award we cherish, not least because so many members of the team, past and present, have all worked hard to achieve the standards required and, even harder, maintain them. The Good Food Guide, too, upheld the fab rating of 8/10 while also placing us in their annual line up of the U.K. Top 50 Restaurants at position 23. What a privilege to be included among names that we admire so much. And lastly on the awards front, the international food ranking website La Liste released its annual round up of top 1000 global restaurants. The Peat Inn has been placed among its top 500. That’s been a special way to round off 2019 for all the team.

Some special dinners and events make stand-out memories for 2019. One of our favourites was a tasting dinner with Peter Wood of The St Andrew’s Wine Company,  at which he showcased a remarkable collection of every declared vintage of Grahams Port since 1945 . The largest event (by a very long way), meanwhile was for 700 guests …and no, it wasn’t held literally at The Peat Inn. Instead The Peat Inn constructed the menu for the annual Scottish Food and Drink awards of excellence, held at Edinburgh’s Corn Exchange. Also in Edinburgh, Geoff Smeddle cooked a three course dinner for the homeless charity Social Bite, at Vesta. (www.social-bite.co.uk) .Back in the restaurant itself, we have been proud to support the charities StreetSmart, Save The Sea and Love Food Give Food. We even undertook a brand new first for us: in  July we held our first ever Sunday brunch, in support of the nationwide charity Social Sunday, in aid of Hospitality Action. The sell out event will definitely not be the last, so brunch fans watch this space….

And what of general highlights of the past ten years? In his typically selfless style, Geoff took on the role of an ambassador for Bunnahabhain whisky for 12 months (involving the tiresome job of attending lots of tastings and dinners; tough work, but someone’s got to do it). The restaurant had, what we still feel, is a gorgeous make over, completed with  sensational Scottish artwork from The Fraser Gallery of St Andrews.

We’ve been joined by guests from countries as far afield as Kazakhstan (another first in fact) and many famous faces too. Above all, we have been supported by wonderful guests, passionate Scottish suppliers and outstanding members of the team who have come not only from Scotland of course, but from around the globe,  to make Fife their home. We hope 2020 will be the year that you too can make The Peat Inn your home from home, whether it is a new decade or not! 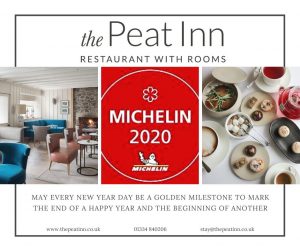